In 1916, the State of Florida began to open a stretch of roadway along the Atlantic Ocean coastline, as a more scenic alternative to Route 1, now called the Federal Highway. The road eventually became known as State Road A1A. To address high winds along the route, Australian Pines were planted along both sides of A1A, from Jacksonville to Miami. The Town of Gulf Stream is the only remaining stretch where the Australian Pine Canopy still remains. It has since been designated as an historic and scenic highway, allowing the Town to protect and cultivate new plants to maintain and expand a stand of more than 300 pines.

During the early 1920s, the land now called Gulf Stream was largely in its raw natural state, with a few cultivated acres leased for farming or grazing. At the time, the intracoastal canal was freshwater, providing irrigation for agriculture. Starting in 1922, Bessemer Properties, a real estate venture controlled by the family of Henry Phipps, Jr. (co-founder with Andrew Carnegie of the company that became U.S. Steel) began to accumulate parcels of land on both sides of the intracoastal canal for future development. Friends and business associates of the Phipps family in Palm Beach saw the roughly 500 virgin acres of property as an ideal location for a golf course and polo fields, surrounded by seasonal residences.

Photographed in Town of Gulf Stream, Florida, Date:1930s, Polo was a highly regarded sport in Gulf Stream as can be seen during this polo match, circa 1930s. Hundreds of spectators came to watch the matches. Some anchored their yachts in the Intracoastal, while others parked their cars in double rows along the palm-lined fields. In the distance, one can see the ocean and the original configuration of SR A1A adjacent the beach. It has since been relocated to the west.

Led by two of Henry Phipps’ sons, Jay and Howard Phipps, and including prominent Palm Beach residents such as Paris Singer, Edward Stotesbury, Edward Shearson, and E.F. Hutton, plans were laid to construct a first-class golf club. The Gulf Stream Realty Company (so named because of the close proximity of the property to the ocean gulfstream) was established to market residential lots along the oceanfront, some of which were acquired as early as 1923. In March of 1924, founding members established the Gulf Stream Golf Club. Legendary Palm Beach architect Addison Mizner was commissioned to design the clubhouse; the course was planned by Donald Ross, who designed Pinehurst in 1907. The Club officially opened for play in 1925 and remains one of the premier private golf clubs in the country.

In 1925, Bessemer Properties applied to the State of Florida for a charter to incorporate acquired acreage into a town. Initially, the company had planned to name the community “Phipps Beach”, but the “Gulf Stream” name was now ingrained. Gradually, a cluster of seasonal homes began to be built along the oceanfront. Most were designed by renowned Palm Beach architects under a Phipps maxim that they connote “understated elegance”. Several of these original homes still exist, largely unchanged in appearance from the 1920s.

Prior to completion of the golf course, plans were underway to build a five-field polo complex between the ocean road (A1A was not completed at the time) and the intracoastal waterway. Initially known as “Phipps Fields”, the Gulf Stream Polo Club commenced play in early 1927 and almost immediately emerged as the “Winter Polo Capital of the World”. Afternoon matches drew large crowds–royalty, socialites, celebrities, and many local residents, drawing attention to Gulf Stream as a sophisticated winter resort. 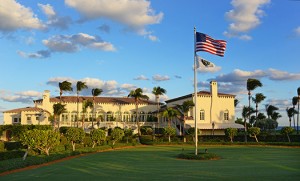 The developers of Gulf Stream had expected steady growth in the 1930s, but the 1929 Crash and ensuing Great Depression put a damper on the pace of expansion. Plans for a non-denominational church for residents were set aside, but in 1938 the Gulf Stream School opened to educate the children of seasonal families. Even in tough times, the golf club, polo fields, and later a bath and tennis club, remained a magnet for residents and visitors seeking relief from cold weather and economic woes.

The advent of World War II brought about a profound change to the Town of Gulf Stream. Proximity to the gulf stream meant that shipping lanes and German U-boats were only a few miles east. The golf course was closed to members, but remained open for maintenance and limited access to servicemen stationed at nearby military bases. Coast Guard and Navy Sea-Bees patrolled the beaches, many on horseback. The Coast Guard shipped horses from Kansas for this duty, housing them in the stables recently occupied by polo ponies. The Gulf Stream Bath & Tennis Club, founded in 1935 by Mrs. Howard Phipps, became a Red Cross U.S.O. center for entertaining troops stationed at the nearby Boca Raton aviation training base. Local lore has it that a German spy was discovered in the shuttered Gulf Stream Golf Club, apparently signaling to submarines in Morse Code by flashlight. The agent was never apprehended.

The Town recovered quickly from the War. The polo fields reopened in 1946; once again enjoying a reputation as the nation’s top winter venue for top international and American players. As the post-war economy began to blossom, property values in Gulf Stream escalated rapidly. The Phipps family decided to sell the fields for residential development in the early 1960s. Several players who had settled in Gulf Stream, such as Michael Phipps and Stewart Iglehart, re-established the polo fields in Lake Worth (Wellington) and participated in the process of subdividing and redeveloping the old Phipps Fields for private single family homes. 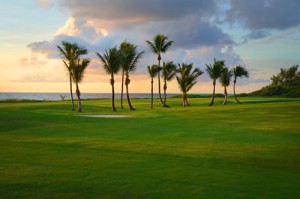 Over the next few decades, the Town of Gulf Stream continued to grow, while adhering to the principles established by the founding families. The Little Club, a Par 3 course, was established. A new Town Hall was erected on a corner of the old Polo Fields. Post World War II “cottages” were replaced by larger homes, reflecting changes in lifestyle. A potential trend towards “McMansions” was nipped in the bud through adoption of a comprehensive design guidelines administered by an Architectural Review and Planning Board, reporting directly to the Town Commission. The purpose of these guidelines is to maintain the unique character of individual districts within the Town.

Gulf Stream is exclusively a residential and recreational town. The original Phipps vision of a place providing its residents and visitors an understated elegant experience has been successfully maintained.

William F. Koch, Jr., the Mayor of Gulf Stream for the past 46 years passed away on June 16th, 2012. He was 91. The beloved Mayor guided the Town through boom and bust years to create the charming and unique community that exists today.

Mr. Koch came to Gulf Stream as a boy in the late 1920s, where he roamed the open beaches and played in the caves dotted along the upland areas. He attended Rollins College in Winter Park and later joined the U.S. Army Air Corps as a bombardier in World War II. After the war, Mr. Koch and his bride, Mary Lou (Freddie), moved to the area, where Mr. Koch opened his real estate office in Delray Beach.

Mr. Koch’s service to the Town began in 1956 when he was named mosquito commissioner after he complained about the swarms of the insects plaguing Gulf Stream’s polo fields. Mr. Koch then joined the Town Commission. After a stint on the Palm Beach County Planning and Zoning Board, he rejoined the Town Commission in 1966 and was appointed mayor – a position he served for 46 years.

All videos will be posted to the following link: https://www.youtube.com/channel/UCyJTjen2HMOSbss-CYOpzdQ/feed?view_as=public